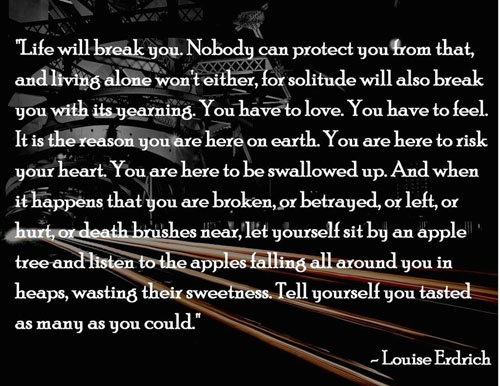 I think this sums up my philosophy on life pretty well.

Well, my “6 month” tests have come and gone. I use quotes because it was technically 6 months and a week, but WHO’S COUNTING, AMIRITE!?

Anyway, I was really hoping to write this post with some kind of update, that my tests were great, and that I was going to start working, etc. etc. etc. But, nope. Not a peep from MSKCC, which, in my head, means either the lab started their weekend early, got backed up because the weekend was busy, or they made a mistake with the test and had to re-run something. Gabriella suggested that if something bad had happened, they probably would have called, so maybe she’s right. We’ll see.

Well, it’s now Wednesday, the week after the week I was supposed to get my results, and still nothing. This is kind of what I was talking about with my doctor beforehand, so apparently, that talk didn’t really go over as well as I expected.

SO. Instead of getting to recap my results, I’ll instead just recap my 6 month visit. Not too much happened, to be honest. We got all my bloodwork drawn, which involved a shit ton of vials for research studies (miss my Hickman), but wasn’t too bad. I got to skip the line for vitals, which is always nice, because that nurse is sweet, but moves at the speed of molasses. Then, before my main doc showed up, I had the biopsy done.

This was rather annoying / confusing.

So the prep nurse came in to set up, and first she had me on my side, which is how Dr. Barker prefers to do it (which is apparently a UK/Australia thing). So far, I’m 3/4 with positive experiences laying on my side for the biopsy. I am 1 / 8 for positive experiences on my stomach. I was told by my NP that Dr. Barker wasn’t able to perform the biopsy herself, like she normally does, because it was just so swamped. I wondered if it was backlash at me speaking up at the last visit, but I think she’s more professional than that, even if I did manage to piss her off. Shrug.

Anyway, halfway through the nurse’s prep, she leaves, and comes back, and tells me to lay on my stomach. And now I’m annoyed. Also, the last biopsy was on my right side, so I had to pick the left side this time. Double whammy – none of the good experiences have used my left hip.

Anyway, I’m determined to just make it through. The new doc comes in, and she asks me if I want to participate in a research study that would involve a skin biopsy after the bone marrow was finished. I just looked at her and made her give me the paper. Does nobody listen to me at this place? If I can participate in additional research studies, just show me the paperwork, show me the section on patient anonymity, and give me a goddamn pen.

I will tremor sign the shit out of that research paper every time.

Anyway, we get things started, and for once, I was actually allowed to keep my kindle so I could read through the process. That helped, and initially, things seemed to be going well. We got the aspirate draw pretty easily, though we had to draw a huge number of vials for research studies I had previously signed up for, so by the end, my leg was getting some fairly vicious pulling sensations. Nothing too terrible, but certainly not particularly pleasant.

Then, when it came time to get the actual bone sample (usually a super easy part), I think my doc drilled into my bone outside of the lidocaine’d area. This has happened before, and previously, the doctors/PA/NPs have just continued on and apologized. This time got bad enough that I was like NOPE. TRY AGAIN. So the doc did just that, which was fairly surprising. Luckily, once we got a decent spot, she got a good bone sample quickly, though not without some discomfort.

Then, I don’t know if she just picked a different spot, or if the lidocaine had worn off, or what, but man, that skin biopsy stung like crazy. And then I had the first sutures of my entire adult life. Well. Suture. I had a single suture used to cover the skin biopsy spot, and 2 weeks later (how long I was told they’d take to dissolve), it’s still sitting around and poking me in the back. Fun!

Now, I don’t know which part of that affected my recovery the most, but while the length of recovery time stayed roughly the same, the amount of pain I stayed in stayed pretty high for a lot longer than usual. Normally the first 2 days are really brutal, and then there’s 3-5 days afterwards of soreness. The pain faded after a week this time, which is perfectly within the realm of normal, but unfortunately, the intensity of it stayed high all the way until the pain was basically completely gone.

I also spoke to one of my Oxford registered nurses, who checks up on me every now and again, and I told her that I thought my glasses were really making a difference in the frequency with which I was getting migraines. Since speaking to her just about 2 weeks ago, I’ve had 3 migraines. One of which was a monster that required 150mg of imitrex to solve. And it still managed to incapacitate me for several hours.

Oh, and then I spoke to a different Oxford nurse, and I told her that I hadn’t thrown up since January, and was generally feeling pretty good. The next night, I threw up.

I really need to just keep my mouth shut and not brag about how well I’m doing. That, or only say so when there’s some handy wood to knock.

Few more final notes – first, I just wanted to clear up some of the sentiment I got about my last post. A few people asked me if I was sad/depressed/unhappy based on the tone of that last post. I guess I might have been a little sad, but I was more angry and annoyed than anything else.

Interestingly enough, I don’t think I’ve really ever felt sad about any of the stuff I’ve had to deal with in the last year (!). The initial weekend I was diagnosed I was kind of sad, but only inasmuch as you’d expect for someone having to go spend a month in the hospital.

I guess when I try to censor my rage a bit, it can come across as sad instead.

Second, I just have to say that I am absolutely thrilled that season 4 of Arrested Development came out. I binged the whole season, pretty much only breaking for food. It was so satisfying, and it only got better as it went on. I’m actually fairly shocked that people haven’t liked it as much as the previous seasons. There are so many hidden jokes, call backs, new jokes, new plots, new developments….there’s just so much. I loved it, I really did.