Ok, so, yesterday I got released from the hospital. Despite getting 2 units of blood on Tuesday, and platelets at 3:00am on Wednesday, my numbers were still pretty low, and I was feeling pretty “meh” overall. I was happy to be home, but not feeling particularly great. I didn’t really want to go out. However, early fall, every 2 years, a few of my friends and I always go to the NYC premiere of the movie made by a guy named Jeremy Jones.

Jeremy Jones is a snowboarder who is basically insane. He hikes mountains that people don’t even climb, let alone ride, and then he finds a line, and rides down it. He risks avalanches, frost bite, storms, glaciers, chasms, and basically, death at any moment, all in pursuit of the sickest lines of riding humanly possible.

In other words, the guy is kind of a Bad Ass(tm).

His last film, Deeper, was awesome. It showed Jeremy getting away from resort riding, and even going past Heli-riding, to take planes deep in the back country. At one point, he and another rider hike up a mountain at night, camp out near the summit, finish the hike in the morning, and then ride down the thing in the afternoon.

The new film, Further, was basically because Jeremy wanted to do this one line off a mountain in Japan, on a ridiculously crazy cliff face, and so he basically just found insane places to go, all to make a film, all so he could fund a trip to do the one line in Japan he really wanted to do. At one point, they go to a mountain range that Jeremy had been to before. The last time he went to it, 2 of the 4 people that went on the trip didn’t make it back.

In other words, the guy is kind of insane.

While I am in kind of awe of him, I can’t help but sometimes wonder – is the man even human?

Now, that’s who Jeremy Jones is. I bet you’re all wondering why I’m telling you about one of my snowboarding idols. We’ll get there. Have patience.

Anyway, last season, my buddy Dan was able to meet Jeremy at a fund raising event. He met his brothers Todd and Steve, who are based out of Jackson Hole, Wyoming, where Dan, Chuck, Or, and I went last year and rode the hell out of it. We got to meet those guys, and honestly, they’re some of the coolest people I’ve ever met, let alone the nicest “famous” people I’ve ever met. Granted, that list is pretty short, but we just kind of showed up, and they gave us a full tour of TGR’s studios, and sat down and talked to us about riding and movies and all kinds of crazy stuff, for a long ass time. They didn’t have to do any of that, but they just did because they’re awesome.

Dan had mentioned a few times that Todd and Jeremy were asking after me, seeing how I was doing, and if I was going to be at the premiere. So even though I felt pretty crappy, I toughed it out, and went.

We start out at the Highline Ballroom, struggling to find one of the *very* limited available seats. As Dan and Tiff found us a table, I was hanging out by the bar, and I noticed Jeremy was in the back, just kinda hanging out by himself. I wasn’t sure if I was allowed near where he was, so I just kinda ignored it. Then Dan came out, and was like “Come with me”. We walked right up to Jeremy, and the man IMMEDIATELY knew who I was, what I was dealing with, and spent a solid few minutes, despite being constantly pestered for picture and signature requests, talking to me and wishing me the best. When the TGR team came up to Jeremy to bring him to the official poster signing thing, he was like “Hang on, I really want to get a picture with these guys”. These guys being us.

If the night had ended there, I would have already been pretty much thrilled. Jeremy Jones remembered my name, my story, and personally wished me the best. How effing cool is that?

But wait, it gets better.

Before every TGR film, they give away a bunch of gear. It ranges from cliff bars, to free trips, to generally, a snowboard being the “grand prize”. Dan has won something in the past, and Christine (of Swab fame) won a pair of head phones 2 years ago. So they’re giving stuff away, and all that fun stuff. The last item they want to give away is a Jones brand snowboard, the Hovercraft. It’s a sick powder board, and I had been meaning to pick up a dedicated pow board for a while. They’re one of those things that are great to have, but living on the east coast, is kind of completely unnecessary.

For this item, and this item only, Jeremy Jones himself gets up on stage. He pulls the card out of the box.

“And the winner is….Anthony Lanza”

I make my way down to the stage, and there’s Forrest holding the board (another snowboarder who was in the film, and had talked to me after I talked to Jeremy). Jeremy takes one look at me, and visibly gets ridiculously excited. He’s like “THAT’S YOU!?!?!”. I legit don’t even know what he said, but he asked if it was ok to share my story, and he gives the crowd a short version of how I’m fighting for my life, how I made it to the premiere despite being in the hospital “6 hours earlier”, and how I was pretty much a bad ass. 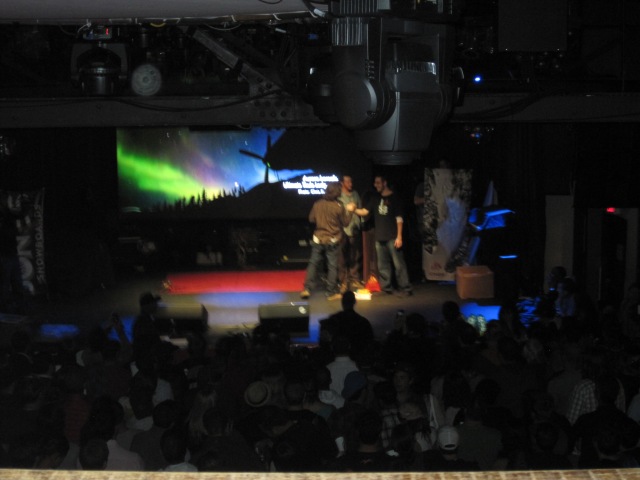 Again. If the night had ended there, it would have been pretty much The Best Night Ever(tm). But nope.

We watch the movie (it was pretty ridiculous). Jeremy comes up to the section we were in towards the end of the film. My friends and I are just hanging out, but Dan goes over to talk to Jeremy. We end up getting to hang out with him for like 15 minutes, and he’s pretty much just the chillest, most awesome guy ever. He said an awesome little mini-speech to me that I’ll try to paraphrase:

“Ya know how sometimes it seems like life is just giving you nothing but red lights, over and over? Well this is a green light, man. And you’re gonna have nothing but green lights from here on out.”

He was so genuinely excited for me that I just didn’t even know what to do. He was like “When you came up on stage, man, I know I said some things and whatever, but it was so much more than that. It didn’t even hit me until I was back stage, and I was just like ‘That was friggin’ AWESOME’. It was like divine intervention or something. You’re gonna ride that board, man, and you’re gonna love it.”

Legit, just, an awesome guy, an awesome night, and hopefully, a sign of things to come. Here’s a few more pictures that he was nice enough to take with us.

And lastly, here’s an image that has become something of a meme with my snowboard friends. It started off at Canon Mountain, with just a silly picture. I grabbed my buddy Dan’s Jones board, my buddy Chuck grabbed Tiff, and we posed as such:

Then, when I was in the hospital after my first round of (induction) chemo, Tiff graduated from law school. Since I couldn’t make it, Dan and Chuck decided they needed to honor my presence in a way only I would get:

So of course, after winning a hovercraft Jones board, we had to do it again. I mean, we messed up the placements this time, but we were in a bar, and trying to do it quick. So sue us.

So in summation, last night was Legen-wait-for-it-and-I-hope-you’re-not-lactose-intolerant-because-the-second-part-of-this-word-is-DARY.

Unbelievable. Pretty much the happiest dude on the planet at the moment.

As for the cancer, I have an appointment at Sloan for Friday, to give me a full work up, to make sure that I’m still healthy enough to get the transplant. It starts at 8am, and finishes around 4pm. And then I have more things to do on Wednesday. O.o. I’ll be posting after that as well to let everybody know how I’m doing. I’ll probably also talk in there about this past hospital visit, but for now, I’m just too happy and stoked to really deal with the bullshit of being sick.

For now, Leukemia can go Eff itself.

← I’m Back!
Hospital Visit, Poked and Prodded at MSKCC, and Mother Of God…THE PICC IS GONE →