Howdy folks! So, as my facebook followers know, I’m officially passed the Day 100 milestone. While growing research is showing that this milestone is somewhat less important than previously thought, it’s a Big Deal(tm) nonetheless. The main things:

One of the major concerns post-transplant is a virus called cytomegalovirus. Something like 80% of the population has it, and in a healthy immune system, it’s not a big deal. Going into the transplant, I was one of the lucky few that was actually CMV negative. This was a major reason why I chose to go with the transplant – not having CMV is hugely positive, as it alone is responsible for about 15% of all deaths after a transplant (one of the leading causes of death, actually, after pneumonia). However, while in the hospital, I was exposed to CMV anti-bodies. Most likely this came through one of the many blood transfusions I received. So, while my doctors kind of rushed past that detail and kind of glossed over things, I’ve been sitting here more or less shitting bricks about it.

Being exposed means that the CMV virus could re-activate. If undetected, it’s basically 100% fatal. There are tests to detect the super early stages of reactivation, but the test is only like 90% accurate.

The good news, though, is that if CMV reactivates, it’s *usually* within the first 3 months. Make it to day 100 without reactivation, and you’re *probably* in the clear. Good news!

I’m still on diet restrictions. I’m really starting to miss restaurant food, shellfish, and baked goods. I want a lobster roll like very few things I’ve ever wanted in my life, and I’m definitely feeling the urge for a Minetta Tavern Black Label burger. And a Dodd cocktail (a signature drink at Minetta that is no longer on the menu, but involves bourbon, absinthe, peach bitters, and an egg white).

I have no idea when this restriction will get lifted.

The next big milestone is 6 Months post-transplant. At 6 months, I get a full work up again, just like I did pre-transplant. They’ll check my eyes, my mouth, my brain, my chest, my muscles, and my lungs, and see what kind of damage I’ve sustained. Then we can see what I’ll need to do to recover, and whether my goal of an olympic distance triathlon in 2013 is reasonable or not.

Tomorrow I get the results from last week’s bone marrow biopsy, as well as the previous week’s blood test to determine what percent host vs donor I am. The last time we checked, I was 100% little baby boy marrow, but as you get further away from transplant, that can change. The ideal case is to remain 100% baby marrow, but often times, the host marrow recovers just a little bit, which is ok. What we don’t want to see is my old marrow re-growing and coming back full strength. That would be big problems, and would likely mean I’d need another transplant. Which would pretty much be the pits.

So, I am decidedly not a baker. Generally speaking, when I mess around with dough, Bad Things Happen(tm). I tried to make gnocchi once for a girlfriend, and when I put them in the boiling water, they just disintegrated into mushy paste. It was nasty.

However, my friend Jenna gave me a bagel recipe, and I’ve now made them twice, and both times, they came out just as good as any New York bagel I’ve ever had. Here are some pictures: 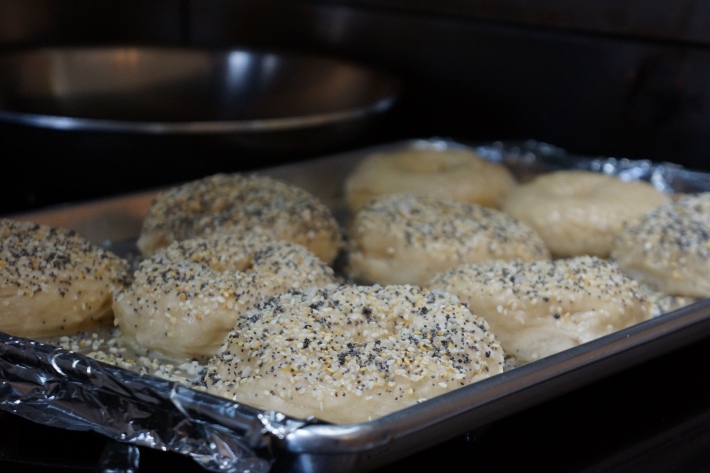 Raw dough ready to be baked 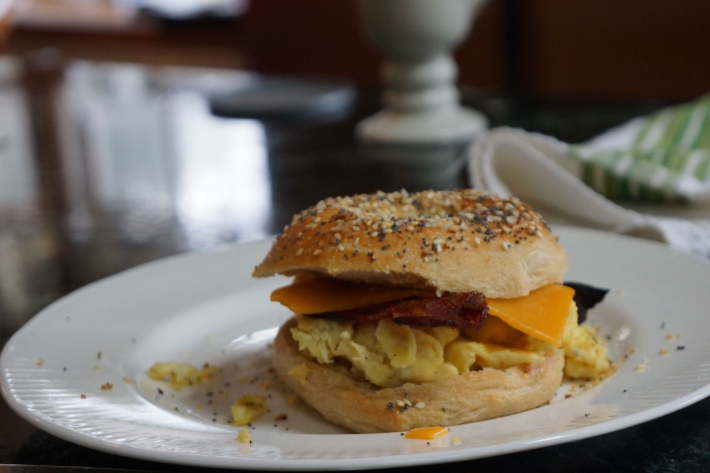 Apple-wood smoked bacon, freshly scrambled eggs, cheddar cheese, and a freshly baked bagel. Doesn’t get any better than that.

Additionally, I’ve had a craving for Korean barbeque ever since I saw a restaurant on Diners, Drive Ins, and Dives make a kimchi fried rice and beef burrito. So that’s what I did. I looked up a Korean beef marinade, my sister went to an awesome Korean/Asian supermarket and got Korean spices and beef and stuff, and we made exactly that. I have to say that it got some of the most positive results of anything I’ve ever cooked. I’m going to have to use all the korean spices and pastes that she got in like every meal, because they just have so much flavor its crazy. Here are some pictures! 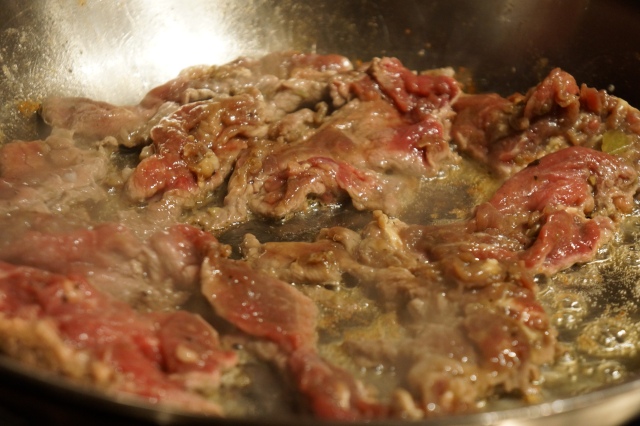 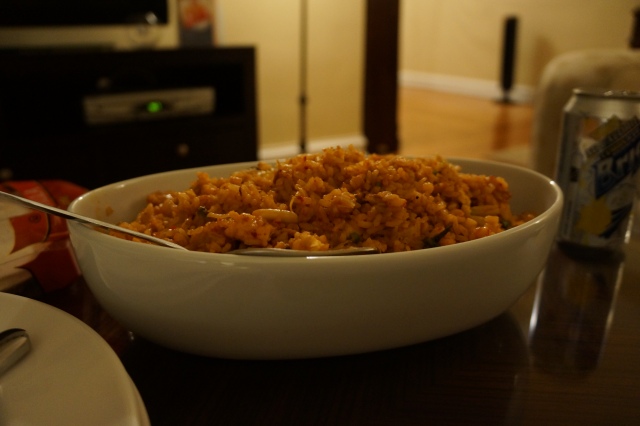 For the fried rice, I kind of made it up as I went along. I diced onion and garlic, and sauteed them in a little bit of olive oil, and salt and pepper. Then I added in some sliced kimchi (pre-made) and sauteed that until the kimchi started to get a little crispy. Next up, I added rice that my sister had cooked the day before, and liberally added soy sauce. In a separate pan, I scrambled some eggs with some butter, then folded them into the rice. Lastly, I added some Korean red pepper flakes (different than regular red pepper flakes).

Then I wrapped it all up and put it in my face. It was glorious. 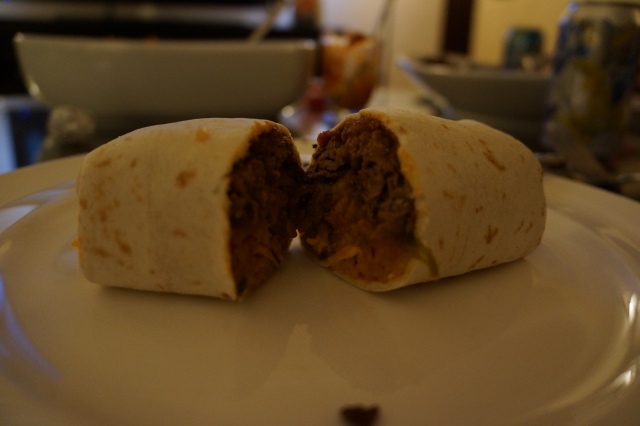 Don’t you want to put this in your face?

Next on the menu, I think I’m going to try to make some chili. I make a great chili currently, but I’ve been debating adding coffee and/or dark chocolate to the recipe to add some extra body and depth. I’ve seen some places on Triple D do one or the other (or both), and I think the flavors would go really well with the current tomato and pepper flavors I currently get. I think I’ll make like 3 batches – one that I know is good with my regular recipe, one with just coffee, because I think that’ll be pretty easy to be good, and one with chocolate and coffee, because I’m not sure if that’ll work out the way I want it to.

Anyways, that’s all for now folks. Hopefully I’ll get some good news tomorrow, and I’ll be able to post a short update about what’s in the immediate future for me. Thanks for reading!

← Catheter out, Day 100 party, Good Counts, and more!
Cancer is a fucking Thief →