So, some people have asked me about my PICC line, and I meant to write about the experience, but a few people have contacted me about their own PICC line being placed. So, I figured I’d speed up writing about it a bit. Should be a fairly short post.

*Warning*: If you’re extremely squeemish, stay away. There’s one picture that shows the dressing, which has a clear view to where the line is actually inserted into my arm. It’s not gross, it’s not disgusting, it’s not weird, odd, or creepy. But I know I have a certain uncle who if he looked at it, would faint immediately (Shout out to my wonderful Uncle Doug, who was there the one time I vomited, and kept it together enough to give me a garbage bin, and get out, before fainting). So, if you are extremely faint of heart or squeemish, just keep an eye out. The picture will be near the end of the post, so you can read all the info and stuff if you’re interested, and still avoid it. There’ll be another warning before the image itself.

With that out of the way, let’s get started!

When did my PICC line get placed?
My PICC line was placed on June 7th, 2012. If you’re like me, and getting a PICC line because you’re on the front end of getting chemo, you will probably also need platelet and red blood cell transfusions before getting yours placed. The most unpleasant part of June 7th (which included: platelet transfusion, first day of chemo, and day 1 of recovery from a bone marrow biopsy) was by far and away my allergic reaction to the platelets.

If you’ve never gotten platelets before, the first time you get them is kind of…odd. All of the doctors/nurses/assistants will be hovering over you, basically watching to see what happens. You see, every time you get *any* type of blood product transfusion, there’s a chance you could have an allergic reaction. With RBCs, the chances are pretty slim. With platelets, though, the chances are fairly high. I don’t know the odds, but I’d say by their reaction it has to be at least 1 in 3. At best (worst?), maybe 1 in 5.

I definitely had a reaction to my platelets. They had woken me up at 4:00 am to start the transfusion, because they really wanted to get me hooked up to my chemo, which had to wait until my platelet count was at 50,000 (I was admitted at about 30,000). I went back to sleep. I woke up again around 5 or 6, when the nurse came in to flush my line (run saline through the last bit of the IV to get it clear). Almost immediately, I felt like I had those little crumbs in my eyes. I rubbed them a bit, and then water streamed out of my face. I told my sister, who took one look at me, and pretty much sprinted out of the room to get a nurse.

She came back, took another look, did another double take, and sprinted out again.

My eyeballs had swollen up like Hitch after eating seafood. 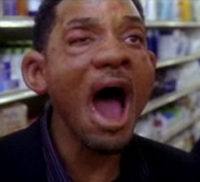 Yeah, like that. Only mine was much worse. Couple that with getting hit in the face by Mike Tyson.

3 nurses and a PA ran in, and then immediately 1 nurse ran out to get meds. I had to get hydrocortisol (a steroid), benadryll, and tylenol. Honestly, the most painful part of my stay in the hospital was that first IV benadryll. I didn’t have my PICC line yet, and man, it BURNED going in. For a solid 5-10 minutes, too.

Anyways, after that, I was prepped and ready to go for the “surgery”.

Why did they place the line?

Typically, most forms of chemotherapy are administered through a PICC line. I was told that it’s “safer”, but they didn’t really elaborate on why. I imagine it has to do with the fact that with cytarabine, you have to be hooked up for 24 hours, for 7 days. Regular IV lines will probably go bad (as in, vein collapse) during that time, and I imagine that if your vein collapsed while the chemo was being administered, bad things would happen.

I suspect that the real reason that the PICC line is placed is more for quality of life. It means that your daily blood draws can come right out of the PICC line. It means that they can hook you up to a split saline drip, where 1/2 of the line is a constant slow drip of saline, and then hook things up to the other side when they want to. Convenient for when you have to change medication in the middle of the night. You already get woken up enough times that being able to skip one is pretty nice.

How long can it stay in?

Probably another reason why the PICC line gets placed is that it can stay in for up to a year, assuming no complications arise. Normal IVs need to be changed after 5-7 days.

Are there risks involved?

As with everything regarding putting foreign shit into your body, this one is no different. Risk of infection, risk of vascular damage. All things considered, these are pretty tame risks compared to almost anything else that I was given during my stay at the hospital. I think only benadryll has a shorter list of side effects.

Any special treatment while at home?

I keep the PICC line wrapped (you’ll see what I mean later). Once a day, I have to flush out the line with saline and heparin. They attached extensions to it so that I can do it myself. I also have to wrap my arm when I want to shower, which is kind of annoying. Anyone out there that broke their arm that knows of an easier way to shower without having to use a plastic bag and tape?

Any restrictions?
I have to avoid lifting more than 8-10 pounds with the arm that has the line in it. Other than that, not much. Don’t get it wet…that’s it?

As for actually getting the line, here’s how it went:

After the aforementioned platelet fiasco, I then had to have the, also aforementioned (in a different post), discussion with my “Donation Specialist”. After that whole thing was done, the PICC team came in to place the line.

You don’t have to go to the ER, don’t need an OR, nothing. They set you up in your hospital bed, and spend about 30 minutes disinfecting every surface near whichever arm is getting the cath. They wanted to put mine in my right arm, but I figured, if its staying there for a while, my left arm is already useless, might as well keep my right arm working.

After everything is cleaned up, they give you a lidocaine shot to numb the surface of your arm. I’m told that some people experience a burning sensation from lidocaine, but so far, I haven’t noticed anything.

Once you’re numb, they make the incision, and honestly, you don’t really feel much of anything. I noticed like a weird..crawl-y sensation up my arm, but that could also have been my imagination.

They then check the placement with a sonogram.

Funny story about that: when the first nurse came in to start prepping (usually done with a team of 2), I asked if I needed to take my shirt off. She said “Nope, you’re fine”. When the second nurse arrived, my arm was already being cleaned and disinfected, and the other nurse immediately was like “Why didn’t you have him take his shirt off?”.

Fast forward to when they’re trying to figure out if they’re in the right place or not. Only about half the distance of the total line was placed, when they can’t get the imaging machine to work properly. After a few minutes, I realize what’s happening, and I hold my ankh out and ask “Could this be causing the problem?”.

Nurse 2 looks at Nurse 1 and immediately says “I told to have him take his shirt off!”.

After that, your PICC line gets double checked by a chest X-Ray, and you’re done. Here’s what it’ll look like (not graphic):

The white cotton thing is where the line goes in. The purple things control the flow. The lines going into me at that point are a blood drip and my chemo/saline drip.

Then, when you’re done at the hospital, and they send you home, they’ll probably put extensions on, so that you can flush/heparinize your lines yourself. That’ll look like this:

Looks similar to the previous, but notice the blue things near my fingertips. That’s actually where you connect things to that line, as opposed to the red/purple heads previously.

When the lines are at normal length, you don’t really need to wrap it up. It’s helpful so that it’s not exposed and grossing people out, but otherwise, not a big deal. Once they place the extensions, though, you will definitely want to keep it wrapped, as the things are long, and can get tangled up on the slightest thing. It doesn’t hurt, neccessarily, to pull the lines. But it certainly doesn’t feel nice. So, here’s how my arm looks normally:

And lastly, if you were ever curious about how it looks just at the site, here’s the image. *WARNING* This one is slightly more graphic than the others. It’s really not too bad, but I don’t want anyone being surprised. 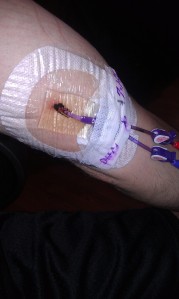 Mine is a little red here because of an error I needed them to correct. That story will be later, probably.

And that’s it! A bit longer post than I had intended, but that should cover just about everything. At some point, I’ll add a picture of how I wrap my arm up to shower. And if I ever figure out a way to wrap it that’s not as annoying, I’ll put that up too.

← Just Some Silly Thoughts
What Can You Do To Help →