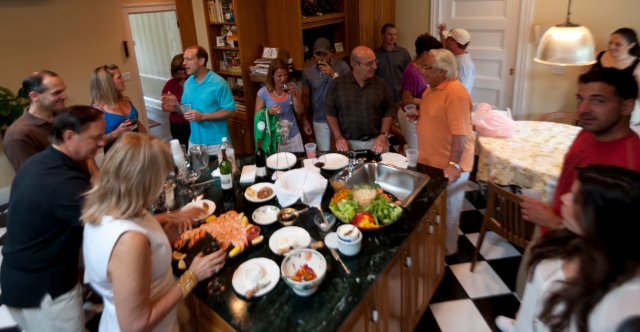 And this isn’t even everyone!

Today is pretty much the last day of the last weekend that I’ll be “normal” for, for a long while. I go back to Presbyterian this Thursday to start the next phase of treatment. For right now, I get one round of “consolidation chemotherapy”, which might be followed by either 3 additional rounds, or by the stem cell transplant. After this round of chemo, no matter what direction I choose, it will pretty much be recover numbers -> start next round, or recover numbers -> transplant.

Luckily, I get to go home after just 5 days of this next round of chemo, so I’ll have a little bit of a respite. Unfortunately, it’ll be under essentially house arrest, because I’ll be back in neutropenia (low white blood cell count, risk of infection, risk of my body getting itself sick, etc.). So like most things cancer-related, there’s very little just straight up good news. Fortunately for me, there has also been very little just straight up bad news. Except for the whole “you have cancer” bit. Not really a silver lining there…

But today, I wanted to talk about the realities of the people that know somebody fighting cancer. It’s funny, if you think about it. Here’s pretty much how my life has gone since June 1st:

That weekend, I sat on my ass and watched TV, trying to distract myself from what was going on. My family came over and cleaned my apartment (awesome), brought me food (awesome), and kept me company (awesome). That Monday, I was driven into Presby, and there I stayed for the rest of June. While there, I sat on my ass, read, wrote blog posts, lapped the floor, was unconscious from meds, and pretty much just hung around. I felt surprisingly good. I had few major symptoms. I only needed pain killers a few times.

Since coming home, I’ve hung out at my apartment. My sister has brought me breakfast whenever she’s been around (and I know it’s been more frequently than just chance, Lau :P). I get my choice of having dinner brought to me, brought to dinner, or left to my own devices. I’ve visited friends, had friends visit me, and just relaxed, caught up on the internets, played video games, and slept.

Aside from the cancer, and the toxins being fed into my body, all in all, it hasn’t actually been that bad of a month for me. I’m pissed that I missed out on running my two triathlons, but again, there will be future years to run them.

My family, on the other hand, has had a pretty rough time of things. Not one person has complained, balked, or otherwise refused to help, do what I wanted, or anything else. At this point, I almost feel bad about asking for anything, but I know that if I don’t ask for what I want, I’m just going to get hounded anyways (that’s a good thing). But let’s go over the list:

Starting at the end of May, my mom needed to drive me from the blood work facility where I got my second labs drawn up (confirming anemia) to the hospital. Then she drove me to the hematologist the next day. My whole family spent basically that entire weekend in my apartment, fixing it up, cleaning things, organizing, and helping me fix the mess it had become when I was just so exhausted at night that I’d basically have the energy to take off my gym/training clothes, fling them into a pile, and collapse into bed.

That next week, and for at least a week after that (I think 2, actually), my mom or my sister slept on a cot next to me every single night. It wasn’t until my numbers started to recover and I told them to get out that they stopped sleeping there nightly.

Just about every morning until the last week of my stay (and again, only because I kicked them out), one of my immediate family members was present at every single morning rounds by the attending doctors.

My sister, mom, and even my Dad, took notes in a binder of just about every single thing that happened while I was there. Remember how I said that you talk about poop a surprising amount when you have cancer? Yeah. That was in there.

Every single major test, result sharing, consultation, what have you, someone was present.

Keep in mind, this is all while they ran the family business without me. Not to toot my own horn, but I’m a fairly integral part of the business. Everyone has had to step up and do a whole lot more to cover me while I’m gone, and I haven’t heard a single complaint. I’m sure they’re being felt, and probably said while I’m not around, but somehow, everyone has kept up the positive vibe. Not that I think they’re faking it – but it’s a shitty situation for everyone involved, not just me.

Not only that, just coming to visit requires commuting into NYC from our home. It’s not that far, mileage wise, but with traffic, it can take more than an hour one way.

And that’s just my immediate family!

My extended family has braved rush hour NYC traffic, even longer drives, all to come keep me company at the hospital so that I don’t go insane from boredom. They’ve sent cards, texts, brought pastries, magazines, travel sized games, chotchkeys (no idea how to spell that), you name it. All my cousins work, or raise kids, and they’ve all found the time to in some way let me know that they love me and miss me.

Honestly, I get choked up just thinking about it.

And the same goes for my friends. I’ve been contacted by, like, 80% of the people I’ve had any sort of interaction with in the last 15 years. People have called, emailed, texted, facebooked – even just to say that they didn’t know what to say other than good luck.

But the real question that I run in to is; how the hell can anyone afford to get leukemia if you DON’T have such a ridiculously awesome family? I am so grateful to my whole family for helping me through this ordeal, but I can’t help but think: What happens to everyone else that gets leukemia?

How the hell are you supposed to have a job? Since diagnosis, I technically have been cleared for work for 2 weeks out of the ~7 that have passed. I will be cleared for 0 weeks in the next 4-6 (minimum), and after maybe a week of being cleared, I’ll be out of commission for most likely another 6-12 weeks. Is someone just supposed to pay you for not being present all that time?

On top of which, life goes on around you. Food goes bad in your fridge. Bills come up to be paid. Cars have to be taken care of.

All of that is basically falling on to my family to deal with, while I just kind of sit on my ass and twiddle my thumbs.

Honestly, the next time someone you know has cancer, consider bringing their family something to in some way relieve their stress. I don’t really know how it would be done, but seriously, after everything we’ve dealt with, when I asked my Dad if he’d make his signature “gravy” for all of the family members that could show up on this, my last real Sunday that I can be out and about, you know what happened?

Before I had even asked him, he offered to make it.

And to put that in prospective, it requires several hours of shopping time to get all the ingredients, because each ingredient comes from a certain place, and you can’t get everything all from one place. It requires several hours of actual prep work to get all the ingredients ready. And it takes several hours just to *cook* the damn thing. But people travel from far and wide for it, and this was no exception. More than 40 people were around, including almost all of my little cousins. That’ll be the last time I’m able to hang out with kids their age, pretty much until I make a full recovery (kids are little germ factories, which is normally fine for an adult immune system. One that’s basically in temporary “off” position? Different story entirely).

So with that, I leave you an image of the fruits of my father’s labors. It’ll be the last time I enjoy it for quite some time, and I have to say that it was worth every single bit of effort put into it. Especially because for once, I didn’t actually have to prep a thing! Hah! 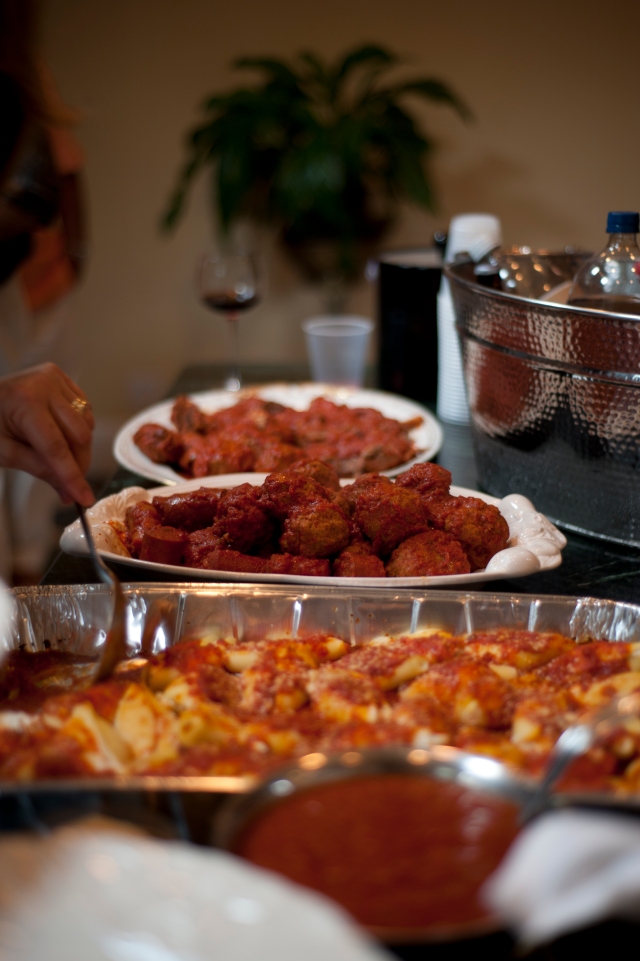 Not pictured: Ravioli, made especially for me, because I’m not a big fan of stuffed shells.